When I began shopping for a ‘WordPress Premium Theme’ three names kept popping up – Frugal, Headway and Thesis. I believe Thesis was the first design platform/framework theme and as such had been recommended by any number of big-shot bloggers. That said, it quickly became obvious to me that the newcomers Frugal and Headway were worthy of my very serious consideration.

A couple of things grabbed my attention early on. Eric Hamm the guy behind the frugalTHEME, appeared to have a very logical mind and struck me as, not just a clever fellow, but also as a nice guy who was/is determined to help less web-savvy folks and, ultimately, to create a great WordPress framework supported by an active online community.

When I had a close look at the Frugal theme I liked:

In the end, I chose the frugalTHEME because it was user-friendly, and fully customizable (about 600 options organized in a logical way). I purchased what they call the Developer Basic version yesterday (20100605). I’m looking forward to the promised Frugal theme upgrades for life.

Disclaimer: After purchasing frugalTHEME I became a Frugal affiliate, so I’ll earn a little income if you purchase using this link:

Update: The guys from Frugal have rebranded with an amazing, WordPress premium theme called Catalyst. If you’ve been using Thesis, Catalyst is definitely worth a look. 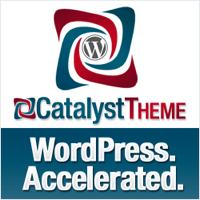 You should also consider WooThemes’ Canvas. It shares some of the similarities of Frugal. I use it for my blog with little modification.