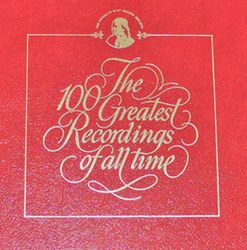 The library was first announced on the 100th anniversary of Thomas Edison’s invention of the phonograph. Each recorded treasure was pressed with a special vinyl formulation that enabled a clear, quiet playing surface on a more rigid LP disk. Every record was pressed in an atmosphere controlled “clean room.”

There are 50 library cases. Each library case houses two proof-quality long playing records, with each record resting, fully protected, within its own dust free compartment. The record is firmly supported within the closed compartment in such a way that the grooved playing surface never touches any part of the case. Each library case includes a specially written and illustrated commentary, by a respected music expert. The composers and their works are discussed in detail, and background information is provided on the orchestras, conductors, ensembles, and featured soloists. 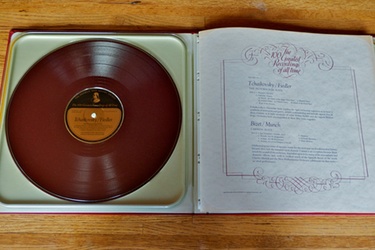 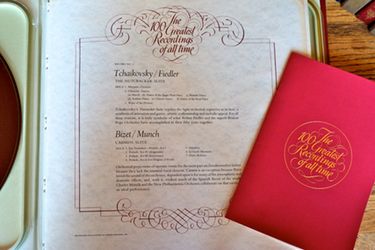 This is a truly unsurpassed private library of recorded music.

I listened to a couple of disks on my Linn Sondek LP12/Linn Ittok arm. I sold the Linn gear decades ago and I haven’t had a turntable since. 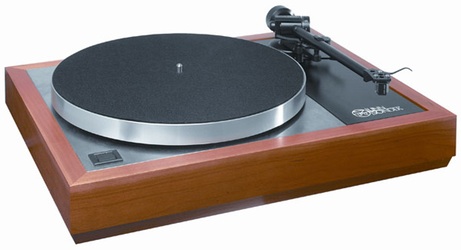 My library has been stored vertically in a sofa table for over thirty years. The vast majority of my LPs have never been played. If you are a vinyl audiophile, you won’t find a more impressive collection.

Franklin Mint – The 100 Greatest Recordings of all time
The complete 100 LP collection is now available for purchase
Price: $2,000 cash

My collection is currently located in Vancouver, BC Canada. I’m open to offers worldwide, but you will have to pay for shipping, over and above the purchase price.

Please use my contact form to express your interest.

Martin Bookspan is a leading critic and former commentator for the New York Philharmonic’s vastly popular radio concerts. He has served on the panel of the radio series “First Hearing” and has also been host and commentator for “Composer’s Forum Matinees” and for broadcasts of the Boston, Pittsburgh, Washington, and American Symphony Orchestras. For many years, Mr. Bookspan compiled and annotated the Basic Classical Repertoire section for Stereo Review magazine.

Schuyler G. Chapin, Dean of Columbia University’s School of the Arts, served as general manager of the Metropolitan Opera from 1972 to 1975. He was the recipient of an Emmy Award in 1971 as producer of “Beethoven’s Birthday: A Celebration in Vienna with Leonard Bernstein” and in 1975 he was honored with a second Emmy for producing “Danny Kaye’s Look-In at the Metropolitan.”

Franco Ferrara, an outstanding pianist, violinist, conductor and composer, holds a faculty chair at the historic Academia di Santa Cecilia in Rome. As a conductor, he has directed many concert orchestras in Europe and has taught conducting at musical centers throughout the world. In addition to his symphonic music, quartets, and Sonatas, Mr. Ferrara has written the lyric opera “The Feast of Fire.”

Irving Kolodin, the highly respected music editor of The Saturday Review for many years, has written the definitive history of the Metropolitan Opera and is the author of The Continuity of Music, Interior Beethoven, and The Opera Omnibus. In 1970 he served as a member of the commission to select the White House Record Library for the Presidents of the United States. Mr. Kolodin presently is a member of the faculty of the Juilliard School of Music.

William Mann, senior music critic of The London Times, is a leading reviewer of records and a member of the editorial board of Opera. He is a contributing editor to The Record Guide and The Great Records. Among Mr. Mann’s books on music history are works on Bach, Mozart, Wagner, and Richard Strauss, as well as A Critical Story of the Operas.

Marcel Prawy, a professor at the Vienna Academy of Music, also holds a position as an instructor at the University of Vienna and in the United States as a visiting professor at Yale University. The author of The Vienna Opera and Johann Strauss: History in Three-Quarter Time, he is well-known throughout Germany in his role as a television commentator.

Andre Previn is principal conductor of the London Symphony Orchestra and music director of the Pittsburgh Symphony Orchestra. A composer of chamber music and other classical works, Mr. Previn has received four Academy Awards for his musical scores for films and has been awarded the London Critics’ Prize for his work in television. He is the author of the book Music Face to Face.

William Schuman, one of this century’s most distinguished serious composers, was the first winner of the Pulitzer Prize for music. He is president emeritus of both the Juilliard School of Music and the Lincoln Center for the Performing Arts. His wide-ranging musical works are too numerous to cite. Mr. Schuman has received many honors and tributes, including 20 honorary doctorates from leading American colleges and universities.

H. H. Stuckenschmidt is a member of the Akademie der Kuenste in West Berlin and a professor emeritus of Technische University. He is the author of several books in the field of music and was recognized in 1976 for his contributions to music with the presentation of the Hans von Bulow Medaille.

have you sold this collection yet???

No, not yet. I’ve had several lowball offers, but the LPs will happily sit in my sofa table until I get my asking price. My collection has been there for 30+ years, so… 🙂

Why do you ask?

have you seen what they sell for on ebay?

It is a shame that no collectors have come forth. Have you tried Sothleby’s or Christies?? It is indeed a nice collection. Your cost is more than $2000 that you are asking. I have 6 Cases [12 records] of this Series myself. On top of that I have The Official Family Archive Collection of TOSCANINI VOL II in Cassette [5 cassettes] as well as part collection of “Country Music Foundation Official Archive Collection” of the The Greatest Country Music Recordings of All Time. Looks like collectors items, from The Franklin Mint Record Society, are not all that popular. I was… Read more »

Thanks for commenting. I haven’t tried auction houses, I haven’t even tried Craigslist or eBay. The fifty cases that house my 100 vinyl LPs, fit my sofa table perfectly, make a great conversation piece and remind me of my days as a young doctor. The market for these Franklin Mint recordings is quite small and would-be-collectors love to get a deal, but I’m not in any hurry to sell. I’ll just vacuum the dust as it gathers. 🙂

I too, have a collection of the 100 Greatest Recordings. I just got a new record player for christmas. Therefore, I am enjoying this wonderful music.. I have had my set since 1972. I have not played most of the albums, so am enjoying old-new found music. I think you are asking just the right price and then it could be raised for the right collector.(:

i am in nanaimo and have 8 of these albums looks like never been played #s 11 to 28 #s 21/22 missing also have vol 0ne of bill munroe country music i have thousands or 78,s 331/3and 45s but i have never seen records in this perfect shape as these SWAMPY

Did you ever get the $2G’s you were looking for?

I’ve had a couple of full price offers, but we weren’t able to work out the logistics. Unsurprisingly, I’ve also had dozens of low-ball offers.

Long overdue comments update: I sold my Franklin Mint ‘100 Greatest Recordings of all time’ collection in late 2012 for the full asking price of $2,000 plus $385 for shipping and insurance.