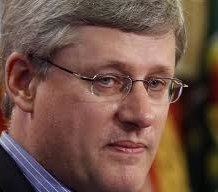 There have been five Conservative, Prime Ministers of Canada, in my lifetime, but only the Harper Conservatives have managed to make me shudder. From my vantage, Canadian politics has gone off the rails and Canada is feeling less and less Canadian every month.

My explanation is that the Harper Conservatives aren’t at all like their predecessors, they are Canadian Progressive Conservatives in name only. The reality is that they’re a group of "angry old uncle," libertarians. Alberta’s longstanding, political discontent (Reform Party => Alliance => Harper Conservatives) combined with a very cleverly orchestrated manipulation of our political system has allowed them to seize power.

The Harper Conservatives’ all too familiar pitch is smaller government and lower taxes for everyone, but they share similar goals with the Republicans in the USA. Their underlying goal is, as always, to enable a small number of rich people, the 1%, to become wealthier and more powerful.

Greed is a Scary Thing.

Inexplicably, many people will vote for lower taxes even if it goes against their own self interest.

As a young physician I made the mistake of complaining to my parents about the taxes I was paying. My father responded, "You’re really going to have to adjust your attitude. Be grateful that you’re earning enough income that you can pay a lot of tax. Our taxes enable us to assist our fellow Canadians and help us do many good works around the world."

I listened to my dad, I adjusted my attitude and learned to be less selfish.

The great purpose of life is to be of service to others.

In my six decades Canada has been known as a country:

Contrast that with what we’ve become known for in the very short time since the Harper Conservatives took power. A country:

Do you remember when Justin Trudeau gave the eulogy at his father’s (Prime Minister Pierre Elliot Trudeau’s) funeral and quoted his father as saying, "… never attack the individual. One can be in total disagreement with someone without denigrating him as a consequence."

Contrast Trudeau’s paradigm with what the Harper Conservatives’ attack ads did to Stéphane Dion and Michael Ignatief. I was dismayed that so many Canadians allowed themselves to be influenced by American-style attack ads. Interestingly, most folks in the middle and on the left of the political spectrum didn’t vote Conservative, they just didn’t bother to vote. As a direct result, we now have a majority government that over sixty percent of our voting population did not endorse.

Don’t sit back hoping a charismatic, new leader for the Liberals, NDP or Green Party will appear. Canada’s future depends on a majority of Canadians standing up and proclaiming that, "Canada is much better than the Harper Conservatives’ ideology."